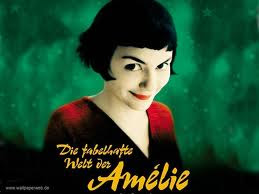 Amélie is a story about a girl named Amélie whose childhood was suppressed by her Father's mistaken concerns of a heart defect. With these concerns Amélie gets hardly any real life contact with other people. This leads Amélie to resort to her own fantastical world and dreams of love and beauty. She later on becomes a young woman and moves to the central part of Paris as a waitress. After finding a lost treasure belonging to the former occupant of her apartment, she decides to return it to him. After seeing his reaction and his new found perspective - she decides to devote her life to the people around her. Such as, her father who is obsessed with his garden-gnome, a failed writer, a hypochondriac, a man who stalks his ex girlfriends, the "ghost", a suppressed young soul, the love of her life and a man whose bones are as brittle as glass. But after consuming herself with these escapades - she finds out that she is disregarding her own life and damaging her quest for love. Amélie then discovers she must become more aggressive and take a hold of her life and capture the beauty of love she has always dreamed of.

Honestly, to understand this movie must to rewind this movie for the second time, The most attractive part to make audience interested to watch this movie is expression by Amelie [Audrey Tatou] , she has good characteristic and awesome. She Adorable beyond belief,  wins our hearts with a performance that could comfortably exist. From this movie can see the real life of ordinary girl with full ambition and imagery . This film use romantic, love, humanity and experiences to solve problem around her.  overall definitely shines out among other movies in it's genre. Audience become loved the style, the directing,﻿ cinematography, all of it was so unique from this movie. May be have a silly or fantastical but in the end make the movie special to audience. For the conclusion, this movie successful to attract  audience. with the name of  Amelie, a young and innocent girl with her own distinctive way of looking at the world, decides to help the people living in her part of Paris to find love audience interested to know about her and the ending of this movie. 4 star from 5 for this movie.
Posted by Cik Nana Merah at 06:25