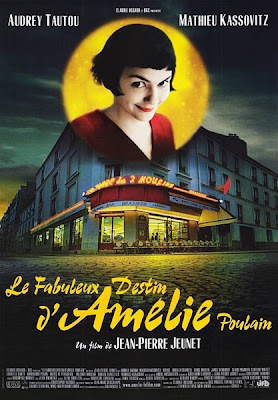 
I saw a very labored compilation of effects, at first a bit distracting and increasingly hard to endure. It is a by-the-numbers movie containing no real surprises or suspense. From the start, with its omniscient voice over that looms over the narrative as well as the audience, the film never strays from its predetermined course


The story gives new meaning to the word "thin": little Amélie, unloved child, gradually opens herself to the world around her, spreads goodness wherever she goes, and finally finds Love after a long series of mishaps and coincidences. With its proliferation of cliches and false surprises, this film has less to do with telling a story than with slipping the spectator into its pocket with one of simple technique whereas the complicity of the permanent wink. Amélie is one of those films that never stops reassuring the audience that it's on their side, taking them firmly by the hand and leading them so well. In this sense it's a very old-fashioned film. To maintain the audience's submission, Jeunet resorts to two distinct methods: facile tricks and stereotypes, the first thriving by artificially animating the second. The audience has grown accustomed to these tricks after years of being beaten over the head with them in commercials. Characters are heavily typed until they're transformed into familiar figures (the obnoxious merchant, his gentle, put-upon clerk, the reclusive old painter, the love-struck cashier, the big-hearted concierge, and then we're given a series of minute variations on said types. Once the audience is in familiar territory, it's seduced by the use and abuse of in-your-face devices likely Amélie's heart beating under her sweater or any number of crazy, ostentatious camera stunts. The frenetic piling up of, and constant emphasis on, these familiar devices, which initially make the film seem so lively, become tiresome. Jeunet creates nothing fresh, but he pulls out all the stops to conceal his lack of inspiration with a profusion of frenzied activity. What's even more seductive is that he's working with a very restricted iconography: the film is filled with hackneyed images of eternal "Frenchness," from the Tour de France cyclist to playground marbles to Montmartre as the quintessence of touristic Paris, the painter of French bliss par excellence, to Truffaut , the legendary custodian of French charm. This aspect of the film is as dull as it is reductive and it's stuck somewhere in a Fifties time warp.

In a sense, Amélie depends on the maniacal cataloging of signifies of a caricature France. However he cleverly opts for a tone that is modest rather than grandiose, and situates his film in the realm of the trivial. As the voiceover says of its heroine, the film "cultivates a particular taste for the small pleasures"—pleasures that, in the end, engage with nothing. And if the Kaganskian thesis of the film's objective collusion with Jean-Marie Le Pen's anti-immigrant platform seems a bit excessive, it must be said that the so-called poetry that trickles through Amélie depends on a profoundly reactionary impulse—the reinstatement of a cliche snapshot image of France in order to reaffirm its enduring value. Amélie is a film that folds back on itself, a chilling return to an obsolete iconography and a frighteningly closed vision of the world. Any attempt to explain the film's success has to deal with its underlying idea: reconciliation. The reconciliation of France with itself, with its past and its past values, and with the idea that the neighborhood is the sole desirable horizon (and between you and me, the only place where we'll be safe and sound). Finally, when all is said and done, we can all hold up our heads with pride.