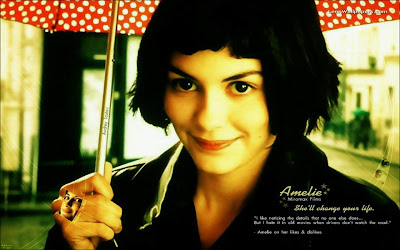 The Fabulous Destiny of Amelie Poulain is a 2001 romantic comedy film directed by Jean Pierre Jeunet. this movie tells the story of a shy waitress, played by Audrey Tautou, who decide to change the lives of those araound him better, while struggling with their own isolation. Amelie, an innocent and naive girl in Paris, with her own sense of justice, decides to help those around her and along the way, discovers love. this film was a major box office success. Amelie won Best Film at the European Film Award, its won four Cesar Awards, two BAFTA Awards and was nominated for five Academy Awards.

I wasn't sure what to expect with this film - I'd heard others raving on the boards about it but didn't even know the most basic of plot details about it, I didn't even know who the director was. When the opening credits rolled and I saw that it was Jeunet as director I immediately realised that this may not be as straightforward as I had thought. Almost immediately, the different humour comes through in lots of ways - from little things like the way the cameras moves up to the full script. The plot doesn't totally work and some of the strands are a little unclear, but overall the film really works well as an alternative romance that is as sweet as it is quirky.      The influence of Jeunet is the main reason the film works as well as it does. He tones down his usual darker style and delivers something just as different and unusual but much lighter and refreshing. As writer he does a great job coming up with imaginative characters and situations. The other reason it works so well is through the performance of Tautou; she is such a wide eyed innocent - sweet without being sickly and likable without taking away from her quirkiness. The support cast are all good and features a few Jeunet regulars but really it is Tautou's film and she carries it well thanks to the great work of the director.

Sexual content in this film probably suitable for screening in western countries but in malaysia such scene should be filtered. it give negative influence to the audience especially teenagers. sex scenes should be reduced, so the film can be marketed throughout the country and can give a good lesson to the viewers.

Use of  color, environment and landscaping create the atmosphere that suits the narrative plot. director also use the camera and computer technique have produced images that bring life to more fantasy and imagination Amelie.

Overall this is a surprisingly sweet film that took me by surprise and was sweetly charming and lovely without falling into cliché - it was different and quirky in a refreshingly enjoyable way. If you come to this expecting one of `the greatest films ever made' then you may be a little surprised because the film is quite unassuming and is best enjoyed when you come to it fresh.