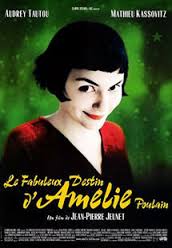 Amelie Poulain has been living eccentric since small, due to the upbringing of peculiar parents. She was home schooled by her mother, because her father believed that she has a congenital heart defect. This had made Amelie did not have any childhood friends, hence developed fantastic imagination to live in her fantasy to cope with her loneliness. After she lost her mother in a ridiculous accident and distant herself from father, she had left home to become a waitress in a café.
Princess Diana’s death has somehow become turning point of her life event. Because startled by this news, she finds a treasure box that she believes the childhood toys and photos inside belongs to a boy who used to live there 40 years ago. Amelie promises herself if she is able to find the owner and make him happy, she will devote herself to do good deeds for people. While seeing the joy in the box’s owner after she returns the box, she has decided to fulfill her promise.
Throughout the movie, Amelie sets out and make everybody happy in an amusing way. For example, she escorts a blind and describe the street scenes on the way to metro station. She has also faking a love letter, to convince Mrs. Wallace that her dead husband still loves her. Besides, she also pulls some funny pranks on Mr. Collignon who is very mean to Lucien, his worker.
Despite in her feat to make the surrounding people happy, her shyness has brought her a hard time to seek happiness for herself. After several encounters with a young man, Nino who she is attracted to, she decides to step into his life. Amelie finally finds the courage to pursue the love she has never dreamed for, resulting in the blossom of a relationship.

CHARACTERISTIC OF AMELIE POULAIN AND MY FILM REVIEW

This movie features the little eccentric girl, Amelie Poulain that undergoes a huge transformation in her later life into an angel-like woman.
She is a girl of tragedies. Having a pair of eccentric parents, she has never enjoyed a real childhood times that any normal children will take that for granted. Her unexpressed thirst for father’s love made her into an unhealthy child with heart defect. As the result, she never go to school and hence deprived of social life. At a young age, her mother left her and her father is incapable to give her a complete family love. Despite all the misfortunes that has fallen on her, she never yield to her fate but choose turn it over.
In this film, Amelie is a woman with strong will. She might seem to be weak, but she never allows the bad things to pull her down. She might seem to be shy, but if she has crossed that hurdle to find the courage to pursue her love, one have to say she is brave now.
I believed that everyone should not be dwelling on the misfortunes but to move on. In this movie, Amelie did not choose to be born into this family, but she definitely has the right to decide what kind of life to live. Thankfully, she has taken a optimistic approach and I am sure her story does encourage those who watch it.
This movie has shown me 3 elements, faith, hope and love. The faith to believe, the hope to move on, and the love to give. Greatest of all is Love. It is because Amelie carries the hope to love, she is bound to be loved.  One thing I like about Amelie is she gives and does not hope anything in return. This defines the true meaning of love. She has helped the surrounding people to feel the joy of happiness, and in the end she is able to be with her loved one.
A meaningful and inspiring movie, yet there are some flaws within. To be honest, the movie is not appealing to me when I first watch. It is when I looked up the story plot online and watch it again the second time to appreciate this movie. The movie is a bit lengthy, and perhaps this is one of the reasons that make me feel bored. Besides, some people treat the nudity scenes in the movie as arts; some may have a different view to it. However, the amount of nudity screen time is acceptable to me, unlike some other commercial movies which flauntingly abuse nudity to fish for box office.