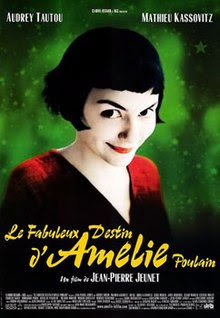 Firstly, before this I have never know about Amelie's movie existant in the industry.  But after this movie was introduced by Mr Ahmad Sharifuddin and watch it for the first time, I found that the movie was very an interesting movie.  Before make this film review, I make a short reading about the synopsis and I found out that it was the same as what my mind told about the story overall.


The film is a whimsical depiction of contemporary Parisian life, set in Montmartre. It tells the story of a shy waitress, played by Audrey Tautou, who decides to change the lives of those around her for the better, while struggling with her own isolation.

From my understanding, the movie starts with a story of a family and a unique child; Amelie.  Amelie was described as having a unique imagination and stays in her own world.  She struggle in make her own decision for her own sake.  Amelie was unsocialise child where she stays and learn at home and only plays alone.  The background of the story helps a lot to explain to the audience about what the story about and what will happend next. The director puts a good storyline in the beginning where it attracts the audience to know what will happen next and eager to watch until the end. 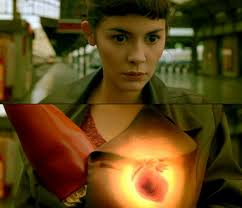 This movie also used a 3D style where we can see how Amelie becomes water after Nino out of her sight, her heartbeat and also how Amelie and Nino travels with their motorbike with many place background.  Amelie likes to help people without exposes her identity and finally fall in love with Nino Quincampoix, a man who likes to collect discarded photographs at the photobooth.  Actually, the narrater already give a sign that Nino is a destined to Amelie from the part of the story where Amelie and Nino in their childhood wish to have siblings buy using a light mirror at the window. 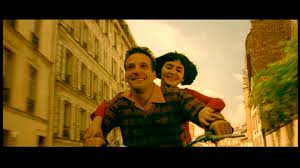 This movie shows a lot of people's attitude with different background such as Amelie herself, a unique girl with high imagination in her own world, Nino with strange hobbies, Mr Dufayel; a Glass Man who did not go out of his house and made painting, Lucien; a worker at the groceries that always bullied by the owner, the owner of the Two Windmills; Amelie's workplace, Madame Suzane and so on.  All of the characters was connected with Amelie. 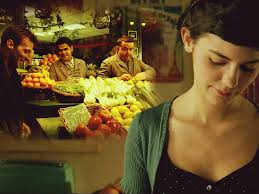 The love story of Amelie and Nino starts with hide and seek to return the photo album and how Amelie cannot admit the truth of her falling in love.  This movie used figuration as the storyline where the characters used figurative sentence to show the true meaning.  The audience also need to understand by themself about what are the point of the conversation for example; Mr Dufayel use character in his painting to help Amelie exposes her feeling. The cinematography used in this movie helps the characters into their characters and also the audience understand the plot of the story by the art use in the story. 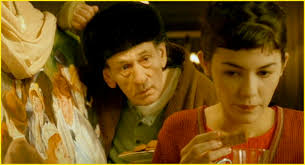 Overall, this movie is unique and interesting with the characters and also the storyline and background used in the story.  That's why this movie won a lot of awards such as Best Film, Best Art Direction, Best Cinematography and Best Sound so on.  Not a waste to download this movie and watch it again for the second and third time.