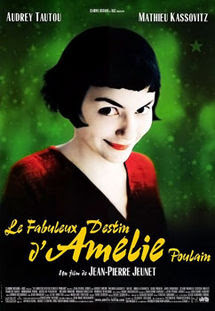 I LOVE THIS MOVIE?? BECAUSE…This is a film about love, shyness, practical jokes and passport photographs. The young heroine of the title is brought up in strenuous circumstances: her overloving but kooky parents teach her from home, and she is raised in a world devoid of physical contact. When her mother is killed by a tourist's suicide leap, Amelie is left with only her withdrawn father and her imagination as a friend. The young girl (a brilliant performance from Flora Guiet) soon devises a regime of practical jokes to entertain herself, the best being when she diverts an annoying neighbour's television signal every time his favourite football team is about to score.

There is so much to take in during the film's opening sequences that you cannot help wonder if the director can keep it up. A strident voiceover links together bizarre sets of coincidences in Amelie's life (not dissimilar from the opening of Paul Thomas Anderson's Magnolia), the screen is awash with extraordinary colours and it begins so pacily and often hilariously that it is nothing short of a perfect prologue.

The action soon shifts to the grown-up Amelie, now living away from her father and living and working as a waitress in Montmartre. Still shy and quiet, she works in a cafe full of romantic intrigue (some excellent support by many of Jeunet's regular players) and retreats to her lonely apartment where again her imagination, as well as the television, are her only soulmates. Looking like a cross between Audrey Hepburn and a grown-up Nathalie Portman from Leon, Audrey Tautou, a relative newcomer to French cinema, delivers a career-defining performance that should spring her to immediate international attention. 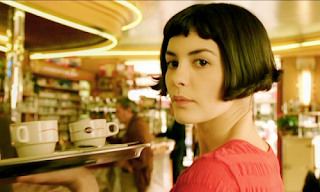 Fragile, frustrating but also whimsical and daring, Amelie's solitary life is altered by another moment of serendipity: upon hearing the fateful news on television of Princess Diana's death (and there is enough of the death of the princess to make it seem as though Jeunet is making a point about Diana's own isolation), she inadvertently discovers a rusty toy tin belonging to a former inhabitant of her flat. Seizing the opportunity to bring some light into someone's life, she tracks down the owner and his gift is returned: the wonderful benefits of her action are shown at the end of the film.

It's a rare pleasure to see a film where the parts gel so well that the finished result is so perfect. The camerawork shows a Paris that is vivid and full of extraordinary colours, almost a fairyland where Amelie is the lonely princess without love. The comedy is subversive enough to satisfy the most cynical of tastes and performances all round are first rate. Le Fabuleux Destin d'Amelie Poussain, to give the film its original title, is just that: a fabulous, wonderful and uplifting film that will strike a chord the world over. 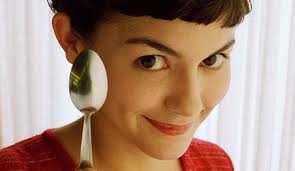