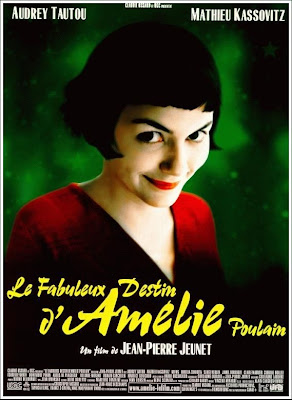 In today’s age of ghastly cynicism, it’s become a cinematic trend to make everything “darker and edgier”; a common word used by filmmakers and fans alike is ‘gritty’ or ‘grittier’. Everything has to become much ‘grittier’ to please the masses. Don’t misunderstand me; I love a great deal of dark films, but not just because they’re dark films. The increasing amount of cold, hard realism and depressing material in modern movies defeats one of the main points of cinema: escapism. Why do cinema-goers want to leave their sad, dark lives to watch somebody else having a sad, dark life?

Because of the frequent usage of grittiness in movies nowadays, watching the inherently optimisticAmelie (even if it isn’t my first viewing) is like taking a cold shower after a long, sweaty day.
Released in 2001, Amelie is a French film – now, now, come back here. Just because it’s in a different language and has subtitles doesn’t mean you won’t enjoy it. I am able to comprehend the fear of different language films – I can’t speak French, and thus viewing Amelie was initially daunting – and even though you might feel like the English text is drawing your attention to the bottom of the screen too much, it’s not any kind of a struggle to watch this film in French but with English subtitles. However, this is probably because Amelie is absolutely wonderful.
It tells the tale of a French young woman, Amelie Poulain (Audrey Tatou, one of French cinema’s biggest stars), who suffered from a severely isolated childhood, due to her father Raphaël (Jacques ‘Rufus’ Narcy) mistakenly diagnosing her as having a heart defect. As shown quite early on, Amelie’s mother (Lorella Cravotta) didn’t have the best of nerves (she screams madly at one point when the suicidal tendencies of Amelie’s pet goldfish become too much), and while exiting a cathedral, was inadvertently killed by an American jumping off said cathedral.
The adult Amelie is an employee of the Two Windmills café, and we are educated in her love for life’s simplest of pleasures (cracking crème brûlée with a teaspoon, skipping stones, and, ahem, guessing how many couples in Paris are having orgasms at a precise moment in time) as she leans on the Fourth Wall amusingly.
After taking joy in reuniting a middle-aged man with a lost box of childhood treasures, the lonesome and introverted Amelie becomes inspired in committing countless acts of good anonymously, becoming the guardian angel of everyone. Thusly, her good deeds include linking a pessimistic co-worker and an obsessive customer romantically, bringing happiness to the heartbroken and widowed concierge of her apartment building, and developing her own form of justice when she starts pulling subtle yet effective pranks on the vile grocer Collignon (Urbain Cancelier). Amidst all this however, she becomes infatuated with a young man (Mathieu Kassovitz) who has just as many bizarre tendencies and hobbies her, but her shyness threatens to stifle any chance of contact with the man.
Amelie’s setting is an utterly charming Parisian paradise resembling a colourful postcard, with the camera adoring and worshipping the superb sets; the original and memorable shots are further enhanced by the creative editing, which perfects a delightful opening sequence featuring a younger Amelie during her childhood. Another great stylistic aspect is the musical score by Yann Tiersen, which is quaint, pleasant, bouncy and a score that I could honestly listen to for hours.
Tatou is spectacular in her role as the matchmaking godmother of eccentric outcasts, and she has ten times the presence of most characters in American movies. Her face has a unique kind of prettiness which is made good use of, with her large impish eyes and pointed features being brought almost too close to the camera at times. Innovative director Jean-Pierre Jeunet (who also wrote part of the script) renders her completely unforgettable, with his titular heroine connecting to the viewer grandly.
My Review

Like Amelie, we all yearn for friendship, we all want to help one another at some point, and most of all we all yearn for love. Amelie is encouraged to follow her heart by the equally lonely Raymond Dufayel (Serge Merlin), who was born with “...bones as brittle as glass”, and when she triumphs, the viewer feels just as happy about it as she does. We become deeply connected to Amelie and her story not only because of the familiarity of several situations in the film, but also because of Tatou’s commendable acting skills.
Jeunet came up with the mesmerising story (thankfully driven by dynamic characterisation rather than plot), whereas Guillaume Laurant penned the dialogue, which is simply superb. The combination of a great story and a great script inevitably results in a movie with some great substance: wild jokes abound, random yet spectacular occurrences leap from corner to corner and we become as dedicated to Amelie’s aims to the character herself.
Because of its sheer uniqueness, charm, intelligence and heart-warming storytelling, I would whole-heartedly say that Amelie is the finest movie to have been released in 2001. Following just a viewing of this artistic masterwork, you will feel refreshed, reinvigorated and inspired to imitate Amelie’s kind actions. Only a few films a decade are this good, this light-hearted, this touching and this human; therefore, do yourself a favour and watch Amelie, and you’ll end up feeling like a new human being afterwards. The beauty of this film is that whilst striving to present a kind and sweet world, it doesn’t avoid displaying life’s random tragedies, bizarre occasions, unexpected quirks, and the uncertainness of the future. Yet instead of showing how depressing such things can be, Amelie is a triumphant and dazzling celebration of life’s weirdness, of life’s uncertainness and of life’s randomness.