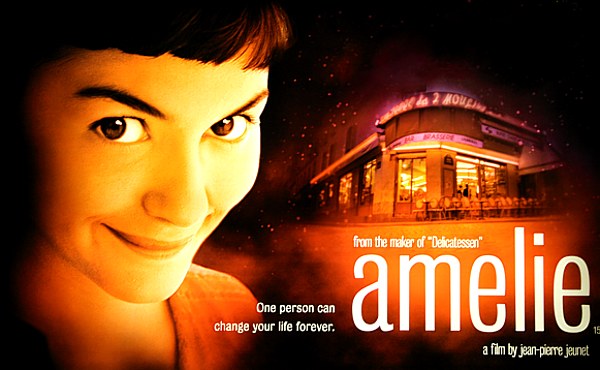 Amelie, is French movie about a 20-something girl who lives her life one fantasy at a time. Chain of events that leads the girl, Amelie (Audrey Tautou) to decide that she should spend the rest of her life helping others, but along the way forgets about her own personal happiness.
Amelie is a French film where nice people gets to live happily ever after and not-so-nice people gets their comeuppance one way or another. (A not-so-nice person of note is the corner grocer, who Amelie dispenses justice to in very creative ways.) The movie starts off with a quick recap of Amelie’s life, from the lost of her goldfish as a child to her mother’s death at the hands of a Quebec woman who does a suicide swan dive off a church roof.
If you haven’t figured it out by now, things in Amelie never happens in the real world. Amelie’s coincidences take the cake and wanders into the world of complete fantasy. If you go into the film knowing and accepting this premise, then you’ll most likely enjoy yourself and not think, “That can’t happen in real life.” No, but it can happen in movies like Amelie.

It cannot be stressed enough that director Jeunet knows how to frame a scene. Every shot in Amelie is painstaking in its brilliant use of bright pastel colours and its delicate, perfect arrangement of furniture, actors, and background. No shot is too small, no scene too short for Jeunet to lavish over. The man has a good eye for frame composition. Every single frame of Amelie is a lovely ode to the French neighbourhood where the movie takes place. Its movies like this, shot in this fashion, that makes us want to visit France. Unfortunately, I doubt if the real France is this fluffy and magical. But reality doesn’t matter, since Amelie seems to take place in a world all its own. 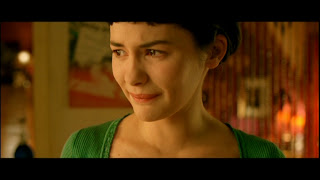 To describe the many subplots of Amelie is doing the film injustice. There are multiple storylines, from Amelie’s own love life (or lack thereof) to her quirky neighbours and their own past and personal problems; to her father, who has not been himself since his wife was killed by the Quebec jumper; to Amelie’s co-workers at a cafe’. Every character that graces Amelie have very individual personalities, quite a difficult task, since the film has a long cast list. There’s Nino, a man who collects discarded public pay photo booth pictures; the ex-boyfriend of one of Amelie’s co-workers, who stalks his ex and dictates everything she does into a microcassette recorder; and there’s Amelie’s neighbor, who has been painting the same Renoir picture once every 20 years for some odd reason.

That is not to say Amelie is a perfect movie. It’s a good movie, but after a while it does loses its lustre. The magic, as it were, starts to wear off. There’s also the rather lame sequence of mistaken identity and sitcom-like situations toward the end with Amelie and Nino that tarnishes an otherwise pretty unique film. Although I enjoyed the film, I didn’t find it particularly groundbreaking, especially in light of the work of Paul Thomas Anderson, who has been weaving complex multi-character films for a while now. And Anderson does his film in the frame of reality, an even more difficult task given the constraints of real-life.
So go into Amelie for a fun time, just don’t expect too much. It’s a fun, silly film, but it’s not nearly as deep as its makers would like us to believe.
Posted by Unknown at 08:48