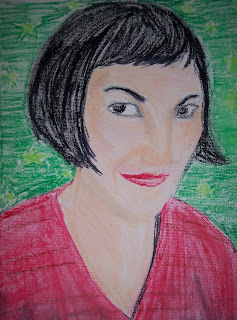 The Fabulous Destiny of Amelie Poulain is a film of a romantic comedy genre directed by Jean-Pierre Jeunet. It shows the description of the modesty Parisian life, located at Montmartre.
In this story, Emilie is shown to have different behaviours from other children of her same age due to surroundings factors. She was diagnosed by her father to have a heart problems, Raphael Poulain who is an ex-army doctor treated her cold in the house. Her mother is a teacher decided to teach her at home and did not allow her to go to school to communicate with others.
After the tragic dead of her mother, Amelie stayed in the house with her father. After 5 years,she left the home and become the waitress at Two Windmills and still live surrounded by strange things. Then she found a treasure box owned by a young kid. By tracing down the owner of it which is Mr.Dominique Bredotau, she was also unintentionally has been involved in a Mrs.Wallace's husband secret story, and brings her to the Mr. Raymond Dufayel, his reclusive neighbour and his drawing masterpiece. Being able to return the treasure box to Mr.Dominique has made Amelie eager to help others.
I personally think that this movie magnificently shows the value of uniqueness. It shows that uniqueness is not sinful plus we can show the true self of us in this odd value by contributing and helping others. This movie might change the people scope of thinking nowadays, or the “paradigm” that we are taught and familiar with, that is; we are safe as long as we are same with other people, and they will like us and accept us. This is totally wrong since we have been too oriented to adopt the behaviour of copying other people which do not reflect our true self or a simplistic word to describe it, being hypocrite.  Emilie, what she is doing is being herself, honest to herself, honest to others, and the best of all is helping others. We cannot be copy cat, it’s better to be ourselves and accept the fact that we cannot satisfy everyone, but we can satisfy a lot of people by being nice even if we are weird.
I can tell that the director of this movie is emphasizing the value of uniqueness, differentiation, not standardized, and avoid being copy-cat or hating our true personalities. This gives a lot of lessons, and the big ones are all of the “positive values” shown by Emilie. I would like to say this: choose a job that you love, and you will never have to work a day in your life. This makes sense to Emilie, she is not helping people and considers it as works or burdening things, she enjoys helping others. The director of this movie is actually telling us directly that we have to enjoy what we are doing especially in helping others.
The other positive value is, Emilie is not going to wait and sit there so that what she wants will come to her. Instead, she pursues what she wants. Even if you are on the right track, you will get run over if you just sit there. Whatever we do, we must perform our best and giving the best effort that we possibly can, we will turn out to be a positive person like Emilie.
However, the nudity part of this movie is seen to be too revealing and quite embarrassing. Sexual explicit materials will affect how people would behave, especially children and teenagers. The positive values of this film are blend together with nudity, make it a little bit imperfect. Free sex, is the negative idea emphasized or shown, it would be harmful for people behaviour. As human being, we should know that our body parts are not to be displayed for entertainment and free sex will destroy the obviousness of human descent.

Actually there are a lot of things that can be criticized about the movie, and it would be 1000 pages to tell them all. A few big things mentioned actually are more than enough. To conclude, this movie, The Fabulous Destiny of Amelie Poulain has a lot of magnificent ideas and values being emphasized. However, there is obscene elements displayed in the movie which are totally unnecessary.