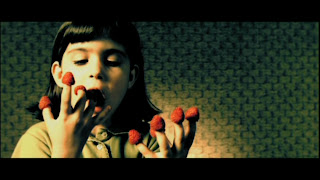 This film is about the amazing life of unsociable but kind young girl named Amélie Poulain.
The movie starts by introducing the characters. Jean-Pierre Jeunet makes this introduction very unique by explaining a character based on their weird habits, likes and dislikes. With a funny comment/dialog from the narrator, it captures the audience interest from the start.

The interesting part is when Amélie Poulain felt amazing feelings when she helped a man to retrieve back his toys that he kept for 40 years. Amused by that feeling, Amélie Poulain kept helping people until he found a man of her dream, Nino Quincampoix (played by Mathieu Kassovitz) who also have a weird hobby which is collecting discarded photo.

The glass man (played by Serge Merlin) helps Amélie Poulain by giving her advises so that Amélie Poulain not only helping other people but to help herself.And after setting a couple of games which Amélie Poulain loves to do, she finally brace up herself to meet the guy thus started their relationship.

Applause to Audrey Tautou,  who manage to carry the character of innocent, kind, and socially awkward girl very effectively.

All in all, this movie is a success, 5 out of 5 stars. No one can beat French guy when it comes to arts value.

The comedy in this film is simple and easy to understand yet still acceptable to be laugh. Most of the comedy didn’t involve dialog but involve audience comprehension and actor’s face reaction and body language.

The way Jean-Pierre Jeunet shot this film by zooming every single thing he saw and spectacular lighting in every scene makes a cool cinematography. He also inserts some cartoon elements to show emotion and fantasies more effectively.

Even the sound effect and soundtrack in this film had its own artistic value which you cannot find in Malaysian films. No wonder this movie was nominated and won many awards.