Amelie Poulain (Audrey Tautou) is the only child of Raphael and Amandine; a doctor and schoolteacher, respectively. Raphael (Rufus) is a stoic and distant father, and never makes physical contact with his daughter except for a monthly medical checkup. When Amelie is six, he concludes that she has a serious heart defect (when in reality, Amelie's heart beats faster due to nervousness from the contact). He declares Amelie to be too delicate for school, and she is taught at home by her mother. Amandine (Lorella Cravotta) is constantly stressed and anxious, and breaks down over strange events such as Amelie's goldfish leaping from its bowl. Given no mental stimulation from her parents and isolated from other children, Amelie develops an intricate imagination to entertain herself. She becomes fairly comfortable in her solitude, but her life is shaken when her mother is inadvertently fatally crushed by a suicidal tourist leaping from the roof of Notre Dame. Her father becomes deeply depressed, and Amelie receives even less parental affection. In her late teens, she moves to her own apartment and takes a job as a café waitress. 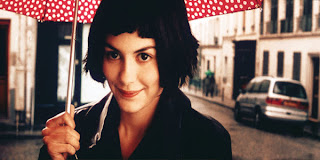 Amelie amuses herself with life's simple, everyday pleasures, since her romantic relationships were often disappointing. She takes interest in the lives of others, but does not get involved. Residents of her apartment building include Raymond Dufayel (Serge Merlin), an elderly reclusive artist with very brittle bones; Madelene Wells (Yolande Moreau), the sulking concierge who mourns the death of her cheating husband, Collignon (Urbain Cancelier), the grouchy grocer; and Lucien (Jamel Debbouze), Colignion's clumsy employee. On August 31, 1997, as she watches a news report of Princess Diana's death, Amelie finds a small box behind a wall in her apartment. It contains pictures and toys from decades before. Amelie decides to find the box's owner to return it, and if he is touched by the gesture, she will dedicate her life to such acts of kindness.

After consulting Colingion's parents, who had lived in her apartment building around the time the box was hidden, Amelie receives a possible name for the owner: Domonique Bredoteau. Amelie looks up several Bredoteaus in the city, but to no avail. Her neighbor Dufayel provides her with the correct spelling- Bretodeau- and Amelie is able to track him down. She slyly returns the box to him, and the aging Bretodeau (Maurice Benichou) is brought to tears by his childhood memories. After anonymously trailing him to a bar, Amelie learns that her act had inspired him to visit his estranged daughter and finally meet his grandson. Amelie is delighted.


Amelie decides to encourage her father to travel for the first time. She steals his beloved garden gnome 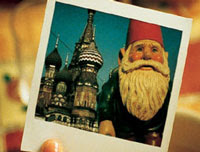 and gives it to her stewardess friend, who takes pictures of it in famous foreign locations at her flight stops. Amelie anonymously sends the pictures to her father. One day at the train station, Amelie encounters Nino Quincampoix (Matthieu Kassovitz), an eccentric young man whose hobby is reconstructing torn-up pictures found underneath photo booths. Nino drops one of his photo albums when chasing a mysterious man through the station, and Amelie looks through it. The man Nino was chasing appears in reconstructed photos throughout the album, and Nino was intent on discovering his identity.

Amelie decides to return the album, but is interested in meeting Nino. After visiting the pornography shop where he works as a clerk, she learns he has another job at a carnival. She sets up a series of clues for him that would eventually bring them together. Meanwhile Gina (Clotilde Mollet) , a co-worker at the cafe, is plagued by her ex-lover, Josef (Dominique Pinon), who jealously spies on her all day and mutters notes into a tape recorder. Amelie attempts to remedy this by setting him up with another co-worker, the hypochondriac Georgette (Isabelle Nanty). Meanwhile, her cat-and-mouse games with Nino have captured his attention, and he wants to meet her as well.

In the meantime, Amelie steals Madame Wells's letters from her husband (written to her decades before) and cleverly creates a new letter in which he apologizes to his wife for his infidelity. After receiving the false letter, Madame Wells is overjoyed with the news that her husband loved her after all. Amelie also avenges Lucien by playing practical jokes on Colingion (whom she dislikes for constantly insulting Lucien). Amelie has regular visits with Raymond Dufayel, who has been recreating the same Renoir painting for 20 years. He reminds her that, despite her intentions to help others, she is neglecting her own pursuit for happiness. Amelie resolves to meet Nino once and for all, and lures him to her café with a note. He arrives but she is too shy to address him, even when he gently confronts her with the note. While Amelie is out of earshot, her fellow waitress Gina asks Nino to talk with her in private, to ensure that Amelie will not be hurt by him. After speaking with Nino, Gina sees that he is a good man. However, Gina's ex-boyfriend Josef sees the two leave together and, after being dumped by Georgette, reveals his (incorrect) observation that Nino and Gina are dating. Amelie hears this, and is crushed. 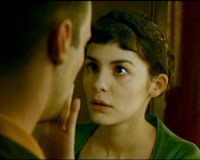 At home, Amelie weeps while frustratingly baking a cake. She daydreams of a life with Nino, amid all the current characters in her life. She is startled when her doorbell rings. She hears Nino speaking to her from the hallway, but she is too nervous to answer. Assuming she is not home, Nino slips a note under her door, assuring her that he will return.

A conflicted Amelie finds a personal videotape from Mr. Dufayel, in which he encourages her to pursue the man she loves, or risk eternal unhappiness. Amelie rushes to the door just as Nino returns. She brings him in without speaking, and after finally seeing each other under new circumstances, they begin a 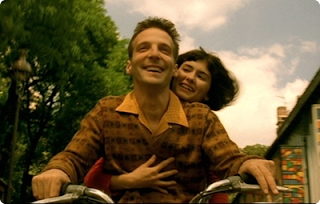 relationship. Some time later, Amelie and Nino are still happy together. A narrator encourages the audience to observe the miraculous details of life that occur every moment. 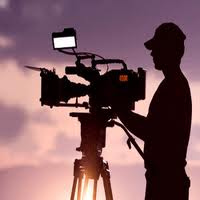 Firstly, on my mind.." What this film talk about actually ? "  Perhaps i do not understand the language or the structured of film..maybe, BUT.. when i watch and read the synopsis again . Ohh ! I got it. This film shows the simple love story within the creative element in it such as the way of shooting . I can see the effects on how shooting progress on the film as it is required many things have to accounted like the exposure , audio, position of acquisition a video, props and so on. This 'tiny' things actually make the bigger impact on how the film produced and enhancing people to watch. 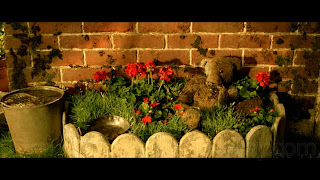 Moreover, Amelie shows the time frame by put the big teddy bear at yard of house within the changing of seasons. It look simple and the producer are success into make the audience understand that time are passing although it just a teddy bear and changing seasons .

As we know, the released year of Amelie is 2001 which we are unfamiliar with the extraordinary film that use many kind of effects like this scenes 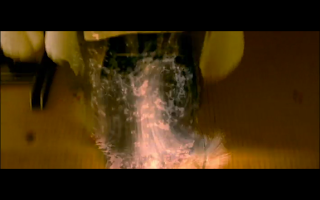 Amelie turns to water when Nino go out of cafe. 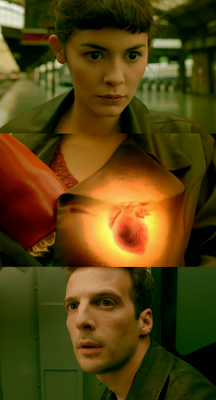 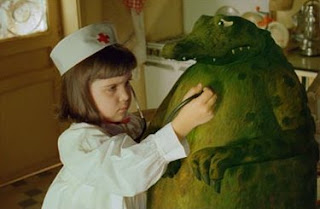 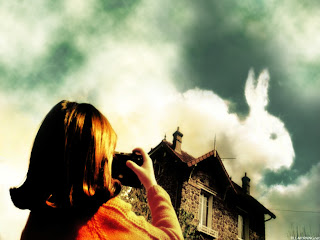 It shows that Amelie success in other to make the audience willing to watch this film by create an innovative way to delivered to their audience .

Much time is spent on listing the little things that make even minor characters happy; we learn, for example, that this person loves popping bubblewrap, that one likes the sound of the cat’s bowl on the kitchen tile, and this other one can’t get enough of seeing bullfighters gored on TV. Amelie, Nino and Jeunet all understand that the minutiae are what make us who we are. The director  maintains a playful, optimistic tone, allowing some conflict to creep in only momentarily. When it does, it becomes clear just how much the movie’s whimsy has captured you, as you realize it’s impossible to feel any suspense. A movie like this can only end Happily Ever After. If the rules of storytelling dictate there must be a complication at some point, we’re willing to sit through it and root for the heroine, knowing full well she will emerge victorious.

Lastly, this film is such great film i have ever seen but there is some scenes that i have to "close my eyes". This is because normally in French, they exposed to the film within sex as their attraction to audience but in Malaysia , it is not normal as majority of citizens are Muslim. Moreover, most of films nowadays use that 'weapon' to buy the people to watch it. It like kind of strategy maybe. I guess so.

That all. Thank you.