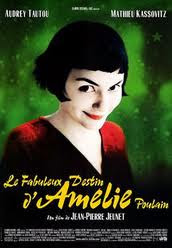 Amelie is about one woman decides to change the world by changing the lives of the people she knows in this charming and romantic comic fantasy from director Jean-Pierre Jeunet. Amelie  is a young woman who had a decidedly unusual childhood; misdiagnosed with an unusual heart condition, Amelie didn't attend school with other children, but spent most of her time in her room, where she developed a keen imagination and an active fantasy life. Her mother Amandine  died in a freak accident when Amelie was eight, and her father Raphael  had limited contact with her, since his presence seemed to throw her heart into high gear. Despite all this, Amelie has grown into a healthy and beautiful young woman who works in a cafe and has a whimsical, romantic nature. 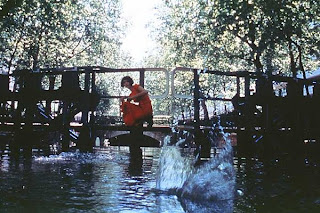 For my opinion this film was successful because the director introduced the film to attract audience to watch this film. Filmmakers know that if they have not captured the attention of the audience within this time frame then the likelihood is that they will not enjoy the film. For this reason many films delay the opening credits by anything up to twenty minutes, until the story, main characters and location have been well established.For me the filmmaker also  uses  visually stunning of the whole film as an introduction.

Apart from that, the filmmaker also recognition of genre plays to tell the audience what type of film they are watching, by giving them visual and audio clues. Me, as an audience, enjoy piecing together the information that are given, for me this is an important part of how audience interact with what is taking place on screen and is what encourages us to watch further. I enjoy the experience of identifying familiar elements and this builds our expectations of what will follow.
The film uses many of the regular conventions that me  familiar with which are not part of the real world, such as moving back and forth in time and being privy to the thoughts of a character. It also plays with the audience, tricking them on occasion into thinking something has a mystical quality to it when actually there is a very simple explanation, as in the case of the mystery ripped-up photos which turn out to be the samples of the photo booth repairman. Me are captivated by the story of Amélie as it’s very difficult to predict what will happen next. I also never sure whether what i see will be part of the real world or fantastical in nature ,the first time an element of the unreal is introduced i'm delighted and surprised and from then on i watch intently in case i miss another ‘magical moment’

For the sound effect ,Amélie is not a film that makes great use of background music. Much of the action is set against a backdrop of silence, which accentuates the sounds accompanying the action we see, such as glasses clinking, doors opening and so forth. In real life the sounds of everyday action are masked and muffled by the background noise so the clarity with which we hear these is quite startling at times, conveying the feeling that this is not reality. In addition, there are some sounds that are distorted, such as the trains echoing through an empty subway station, thus giving the scene an unearthly quality.